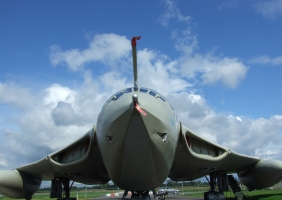 The Yorkshire Air Museum is the largest independent air museum in Britain and is also the location of  The Allied Air Forces Memorial.  It is a Registered Charity  and a nationally accredited museum. Situated in a 20 acre parkland site on the former World War II RAF Bomber Command Station at Elvington near the City of York, the Museum/Memorial is located on the largest and most original WWII station open to the public. It was also the only base used by the French heavy bomber squadrons during the war and today includes award winning gardens, a large NAAFI style restaurant and shop, 15 top class exhibitions and over 60 historic aircraft and vehicles, many of which are in working order.